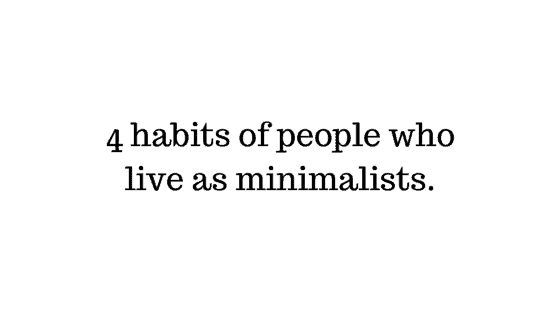 You are here: Home / Save Money / 4 Habits of People Who Live As Minimalists

Whether you know it or not, there may be a huge correlation between minimalism and wealth. The cool thing is, we have a choice with how we want to live our lives – nobody can tell you what to spend your money on or where to live. Here are 4 habits of people who live as minimalists…

And they need less, too. By reducing the amount of material possessions you have, you may come to find that you too can live on less. In this post by Joshua Becker of becomingminimalist.com, he talks about not just de-cluttering, but de-owning as well.

By living in a smaller home (or a tiny home) you naturally have less room for material things. It forces you to go outside instead of watching TV. It urges you to take trips instead sit at home and do nothing.

Recently I read how Steve Adcock from ThinkSaveRetire.com has a net worth of over $500,000 in his 30’s, lives on less, but spends money on experiences that matter instead of material possessions.

4. Minimalists live in the minority

If there’s one thing I’ve learned about success – it’s to do the exact opposite of what the masses do. Minimalism will de-stress, de-clutter, and re-vamp your life. People who live on less are the minority. Can you think of any other people who have found happiness and success by doing what other people aren’t?

My ask of you is that you commit to making one small step toward minimalism today. Get rid of something and see how it feels. I’ve mentioned the Minimalism Game before – so if you haven’t tried it, give it a shot.

I’ve noted that I’m an aspiring minimalist. I’ve learned that I can be extreme with many things, and at one point I wanted to drop everything and become a minimalist. It’s not realistic for me (but it may be for you, so more power to you!) so I’ve decided to take a balanced approach and start living on less by getting rid of crap I don’t need and not focusing on buying material things.

The question is, what steps will you take toward minimalism today?