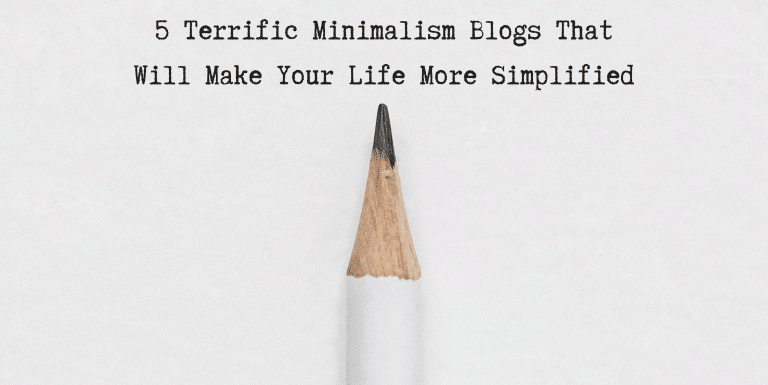 You are here: Home / Minimalism / 5 Terrific Minimalism Blogs That Will Make Your Life More Simplified

Minimalism is fascinating, isn’t it? People who live as minimalists enjoy a life free of clutter and stress. They also usually have little to no debt, because they’re busy spending their money on experiences and life – not things.

I first became enthralled with minimalism a couple of years ago after watching Joshua Fields Millburn and Ryan Nicodemus on TEDTalks (check it out below). The ideas behind it just made complete sense to me.

I started to think whether I could live with less or not. Then I began diving into different blogs and reading more and more about it. For a while, I actually wanted to build a tiny house, too (that didn’t take with the wife).

While full-blown minimalism isn’t something everyone is going to be able (or even cares) to do, I think we can all take some of the ideas and methodology behind it and put it to use in our lives.

Something as simple as decluttering your home is a start. Downsizing is the next step. To get you started, I’ve picked out my five favorite minimalist blogs that are sure to change your life.

These guys set the gold standard for minimalism.

They realized how little they were living when they were each about 30 years old and being sucked into the typical American lifestyle of hyper-consumption, clutter, stress, and working tons of hours.

They had loads of debt, were depressed and felt like they had no control over their lives. Pretty deep stuff.

Joshua and Ryan lived like this until they started to see a completely different way of living – living with less.

They say on their website that “minimalists don’t focus on having less, less, less.” Instead, they choose to “focus on making room for more: more time, more passion, more creativity, more experiences, more contribution, more contentment, more freedom,” and that “clearing the clutter from life’s path helps make that room.”

In 2010, they took a 21-day journey into minimalism. A year later, these two guys changed their lives so dramatically that they wrote and published a book called Minimalism: Live a Meaningful Life.

They went on an international tour and shared their new lifestyle with millions of people. You can see their amazing TED talk here:

And it didn’t end there. The guys have been featured in all kinds of media, gone on a few tours, and have since released two new books: Everything That Remains (2014) and Essential: Essays by The Minimalists (2015).

And they started a podcast.

And they made a documentary.

Yet they still find time to blog.

The Minimalists have seriously set the bar for living below your means and with much less stuff. While the other blogs on this list are phenomenal if you’re going to choose one to read consistently, pick this one.

To get you started here are some of the best articles from The Minimalists:

When I first heard of Rowdy Kittens, I thought it was a cat blog. Let’s face it, cats are pretty much still breaking the internet these days. Yet, when you visit the blog, you see no cats.

Rowdy Kittens is one of the very first experiences I had with minimalism – mainly when I was researching tiny houses. Tammy, the owner of the blog, lives in one.

So yeah – she’s got cats. But this is about much more.

It’s about living small and well below your means. As Tammy talks about, her and her husband were in a pretty deep hole with debt in 2005. They were stressed out and just not happy… sound familiar? (hint: see above).

To make a long story short, she left her regular day job, got rid of almost everything she owned, and started to live a completely different life. And wrote about it.

This blog is about more than tiny houses and minimalism. It’s a simple living minimalist blog.

Tammy aims to inspire while helping you live with less and just be happier. Her writing and the blog’s style are relaxing and quite frankly, appreciated in today’s noisy online environment.

You can read her blog at rowdykittens.com. Tammy doesn’t do Twitter. Good for her.

Here are some of her best posts to date:

Joshua Becker is the man. I seriously love his blog.

Before even reading a word, you can tell it’s about minimalism. It’s clean and comforting. Yet Becker is just a regular dude.

He picked up minimalism in 2008 after a critical conversation with a neighbor of his. Now he and his family live a life of simplicity, with less ‘stuff.’

I’d be shocked if you haven’t read one of his articles or at least heard his name mentioned by now. Many of his posts go viral within hours of him writing them. It’s because what he’s talking about just makes sense.

One of my favorite articles is the one he wrote about people who wear the same outfit all the time – which reduces decision fatigue, something I’m incredibly passionate about.

Did I mention he’s an author too? He’s written five books.

Even if you don’t dive right into his books, you should definitely check out the blog. He posts pretty regularly, and I can say I always leave the site with something to think about.

Here are the best articles from Joshua Becker:

She’s also the author of The Joy of Less, A Minimalist Living Guide: How to Declutter, Organize, and Simplify Your Life, Frugillionaire: 500 Fabulous Ways to Live Richly and Save a Fortune, and more recently Miss Minimalist: Inspiration to Downsize, Declutter, and Simplify.

Her blog kicks ass, too. She started it in 2009 after packing up all of her stuff in a suitcase and deciding she didn’t want to live the typical cluttered, stressed, and material life that most of us inadvertently lead.

Now she talks all about minimalism and even interviews some other minimalists, which is pretty sweet.

Here are some of the best posts on her blog:

In 2010, Rachel and her family took the dive into minimalism and sold, donated, and recycled most of their crap after wanting to stop living in clutter.

While Rachel does focus on some parenting ideas, she also writes about her life as a minimalist. One of my favorite posts is where she wrote about not being married to a minimalist. Be sure to check that one out.

You can read her full blog at theminimalistmom.com and connect with her on Twitter @racheljonat.

Here are some of Rachel’s best articles:

So you can see, there is plenty of reading material out there if you’re interested in minimalism. Even if you don’t want to jump into the deep end of the minimalist lifestyle, it doesn’t mean you can’t start making some small changes today.

Decluttering is one of the first steps toward minimalism. Who knows, maybe you’ll move into a tiny home after that?

What is your favorite minimalist blog? Please share in the comments below!

Ada is a freelance writer living in Oregon with her cat Zeke. She has a background in environmental science and biology but is also a minimalist. Ada practices mindful spending and living, focusing on frugality and trying to reach early retirement.