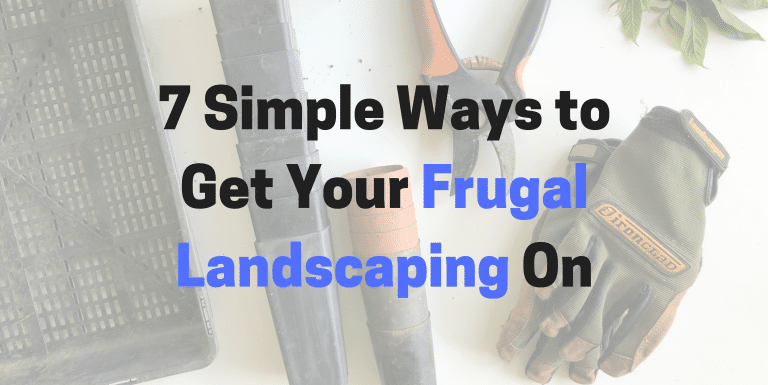 You are here: Home / Save Money / 7 Simple Ways to Get Your Frugal Landscaping On

Holy crap landscaping is expensive. We got an estimate a couple of years ago to do mulch and some essential plants in our front yard, and it was around $4,000. Ugh.

A few years back, I decided to be Mr. Badass and cut my own mulch beds, not having a fucking clue what I was doing. I had a friend over, we popped some beers, and started cutting squiggly lines in the grass as the pros do.

Then I bought a bunch of dirt, covered up whatever grass was left, and topped it with mulch. Bingo! There you have it, a landscaped yard.

Except… no plants or flowers… and a ton of weeds within weeks. I realized that suck at this.

We’ve since moved from that house. But for the hell of it, I drove past it a few months ago.

And there they were. The mulch beds.

Yes, my great mulch beds are still there, but they don’t look as lovely as they did on the first day. My wife is regretting me ever doing this, to begin with, yet I still argue how awesome it could have looked.

If you’ve done any type of landscaping before, you know it’s no walk in the park, either. I’ve tried out different methods and layouts. But I’ve always ended up going half-ass on it for two reasons – the amount of work and the cost.

If you go to Home Depot in the spring, you’ll see people loading up their carts with a shitload of pre-bagged mulch. These folks think they’re hardcore, but they’re just wasting money and energy.

I’ll be the first to admit that I sometimes buy mulch from Home Depot. But it’s usually when I am too lazy and running behind on getting it done.

All jokes aside, buying pre-bagged mulch is not the best way to get your frugal on. When you buy the pre-bagged stuff you’re usually getting:

This may not apply to all pre-bagged mulch, so if you do decide to buy it this way, read the labels.

To save money like a pro, buy your mulch from a local landscaper or landscaping supplier. I usually spend well under a hundred bucks for three cubic yards of mulch, and it’s dropped off right in my driveway. That way I can shovel it when and where I want it.

Some other benefits of bulk mulch for me are:

2. Anything that needs to be done do it yourself

And if you can’t figure it out, use YouTube. You shouldn’t have to pay landscapers to do the work for you. Unless it’s something extreme that the average person can’t do with a little elbow grease.

Landscaping is hard work, and it’s expensive work if you pay someone to do it. Even significant projects like paving a path with stones can be done with a little research.

If you don’t, you’re going to end up with crap. Draw it out on paper. Use spray paint to mark areas around your yard where you plan on cutting or making changes.

Know in advance how much you can afford to spend, and don’t exceed that amount when you go shopping for materials. Bottom line – know what you want to do, estimate the costs, and keep to the plan.

4. Pimp your curb, don’t worry about the back

When you’re getting your frugal landscaping on, you may have to let some things in the backyard go. Remember, it’s all about curb appeal.

This applies even if you aren’t selling your home. Sometimes you just want to enjoy pulling into your driveway. Well, having the front yard look great is never a bad thing.

So when you’re considering decking out the backyard with a park bench and a playground, stop it. Instead, think about planting shrubs, flowers, trees, and laying mulch out front instead.

Do your research before buying plants or flowers that won’t grow where you plant them. Some plants won’t grow based on your local climate for the time of year.

You should also look for sales on items that fit these criteria. You may have your heart set on a particular type of flower. But if something else seems as good and is much cheaper, go with it. Remember, you’re trying to get your frugal on.

This is what I did, and I regretted it. By cutting mulch beds that are too big, I had to do way more maintenance than I had planned.

So if you’re planting too many flower beds or creating a stone walk path that is way too long, think again. You’ll not only spend more time and money up front, but you’ll have to do maintenance on it each year.

I ended up cutting mulch beds that were way too big, and I’d never done a lick of landscaping in my life. After that, I had to buy loads of mulch every year to refill them. Also, when I wanted flowers, it created even more space to fill.

7. Stop trying to be edgy

Okay, I had to use at least one lawn-care pun. Don’t put stupid shit in your yard that you think looks cool. It’s a waste of money, and your yard will look ridiculous.

What am I talking about? I’m talking about an Amish buggy (yes, I’ve seen it). Or little “men” created out of metal sprockets and pipes (my former neighbor down the street).

Or how about a couple of Power Wheels trucks running over each other like a mini, white trash monster rally? Yes, someone actually did this on my street.

Instead, stick to designs that look normal, clean, and professional. There’s no need for trucks, cats, or gnomes. Make it look nice, and you’re good to go.

Whatever you decide to do to your yard this coming spring, learn from my mistakes. And save yourself a little cash. To recap, here’s what you should be thinking about:

And now, a question for you:

What types of frugal landscaping have you done? Please share your thoughts in the comments below!

Wesley has an extensive background in the financial industry and currently works as an equity research analyst. He's working toward early retirement so he can focus on his passion, which is writing. Wesley is currently drafting a fiction novel and lives with his wife and two kids in Indianapolis.