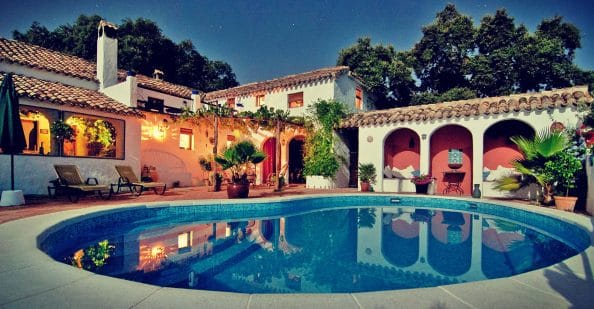 You are here: Home / Save Money / How to Identify the Fake Rich From the Real Rich

That same definition also pops up as the first hit in Google when you search for “rich”.

So the first result in Google comes from Dictionary.com. The first sentence is “having wealth or great possessions.”

I guess being rich means we have money and a ton of stuff, right? But what about the “fake rich”?

Now, we can define the word “rich” in many ways. It could mean we have health, a family, shelter, a job, money – whatever.

For the purposes of this post, though, the word rich will relate to money.

How to spot a wealthy man or woman

Pretend you know nothing about personal finance.

When you think of someone who is “rich” what do you see? Many would see images of suits, fancy cars, or lavish mansions.

Now, I know this isn’t what “rich” means. But I do think society has programmed our brains.

That’s why we conjure up images like this when imagining productive and successful people. As a society, we all have a ton of work to do in debunking the common perceptions of “rich people.”

Until then, here are a few observations I have about the fake rich:

Characteristics of the fake rich

Here are a few things you may notice about people who I would consider to be “fake rich”:

Fake rich people need to make good money to keep up their materialistic lifestyle. The fake wealthy people I know and have seen usually have very steady jobs that make them a good chunk of change.

These people are too busy spending their income on “things” to worry about the future.

I recently interacted with a fake rich person who isn’t far off from the “standard” retirement age.

It wasn’t until now that this person realized they could live on one income while saving the other.

Think of all the time wasted.

Fake rich people need you to comment on and care about their things – such as their home, their car, or their job. They’ll often talk about it in a way that prompts questions and discussion.

This is their way of validating their own lifestyle choices.

This is the easiest way for a person to make you think they’re rich. They lease a nice car or get the newest iPhone to show you.

When you see this person with beautiful things, chances are your brain will tell you they have money (at first glance).

A fake wealthy person I know bought a new iPhone, but then when the “s” model came out six months later. The once-new phone soon became a docked music player, while they went out and bought the newer phone.

5. Love to one-up others

This goes with the point above, but fake rich people enjoy showing that they are doing better.

They won’t actually say these things, of course, but they’ll drop hints.

A fake rich person recently told me their wife went out to pick up a new laptop (you know, very casual shopping trip). His wife returned with the Apple laptop AND a new Apple watch.

He acted annoyed, but when I asked the cost of the watch, he said he “didn’t know and didn’t care.” It couldn’t have been that big of a deal.

The best part was, I didn’t ask about either of these things – but he found a way to tell me.

6. Have to dress a specific way

Another easy way to show someone you “have money” is to dress in expensive-looking clothes. A new power suit always makes a person feel important.

The best example is when you go to a store like Target. You often see women rocking a designer purse, sunglasses, and what seems to be a very expensive outfit.

After leaving, they get into a Lexus that has “LEX” on the license plate (meaning it’s leased). I enjoy a good laugh.

Characteristics you won’t see in the fake rich

Here are some things you may not see or know about the fake rich:

How can someone making good money keep up with appearances, have a huge home, and buy tons of new material items? They have to spend their money!

The fake rich usually aren’t socking it away in savings. Thus, many of them are living paycheck-to-paycheck.

This comes from personal experience. My dad made great money when I was growing up, but he lived a materialistic lifestyle.

The fake rich always seem to want more. These people have to have the newest and best to show others how much money they (think) they have.

This causes dissatisfaction on a regular basis. Imagine this perpetual cycle of unhappiness.

This is one of my favorites. It takes a strong understanding of people to see this but seeing fake rich people become jealous of you is incredible.

I was with a group recently that included a few fake rich people. I mentioned that I was planning to retire at a very early age.

Many of these people laughed in my face, but I was the one who had the last laugh.

Every single one of those people leased their car. At one point or another, they’ve all talked about how tight money was at home.

While they’re working to pay for new cars, big homes, and material things, I am living below my means and loving it.

I’ll take my early retirement while they’re still working to keep up their lifestyle.

Habits of the (real) rich

These people are much more difficult to spot. If you’ve read [amazon link=”1589795474″ title=”The Millionaire Next Door” /] you know that rich people live below their means.

They drive modest used cars and live in homes that are suitable for their needs. They’re “normal” looking people and often impossible to pick out.

From my interactions, the real rich are the opposite of all those things I listed above. Real rich people are happy and do what they love.

They don’t care what other people think of them. They understand the value of saving.

Here are some of the most common habits of people who are wealthy:

Not only does buying in bulk save on money, but it also saves time – something a lot more valuable than money to most.

You can also order bulk groceries and household items online with Boxed.

I recently started using Boxed and it’s been amazing. In fact, I don’t even use my Costco membership anymore.

Although most rich people could afford to pay full price for most things, the truth is – most of them don’t. But shopping for deals doesn’t mean you have to skip the brand names that you love best.

Sites like DailySale.com and Daily Steals offer discounts on all kinds of stuff on a daily basis.

3. Use coupons and gift cards

This may seem like a no-brainer, but couponing is an excellent way to save money. According to Murray Newlands, an estimated 54% of affluent families use online coupons. Not only can you get coupons online, but I’ve also shown my readers the benefits of getting free coupons by mail.

You can also check out sites like Groupon (which has recently been revamped) or get gift cards at a discount using sites like Cardpool or Raise.

You don’t have to buy new clothes every season if what you have is still in excellent. Nor do you need to throw out household items that haven’t been used in a while.

Many things can be repurposed to create something new. The real rich are always looking for new ways to use what they already have.

5. Live below your means

So maybe you can afford a new BMW, but is it necessary? Many other options offer the same luxuries like expensive cars but at a much lower price point.

Maybe you can afford a five-bedroom house. But if you have three people in your family, you need to ask yourself if five bedrooms are necessary.

Take a note from some of the wealthiest people in the world – Mark Zuckerberg, Tim Cook, and Warren Buffett. They all live in modest homes.

Although this one may be easier said than done, the real rich like to avoid having any debt. This means not taking out loans for things like cars and tend to shy away from credit cards.

If you don’t have money in your bank to pay for it, then you don’t need it. Use cash instead, there are many benefits.

With credit cards and high-interest rates, you end up spending way more in the long run. And once you go into debt, it is a lot harder to get out.

7. Make a savings plan and stick to it

The best way to save money is not to spend it. The most successful people start off with a savings plan and do what it takes to stick with it.

Whether you want to put away $100 a month or $1,000 a month, you need to make sure you meet your goals consistently.

A great way to achieve your goals is by creating a prosperity picture. Visualizing your goals can give you the motivation you need to succeed.

So how do the real rich stay rich? They merely live like ordinary people.

Remember, being frugal doesn’t mean being cheap. You can live a life of frugality and still enjoy many things in life. You don’t have to live in a mansion and drive a million dollar sports car to live a prosperous life.

Next step for you

Do you have any fake rich friends? How have you tried to help them live with less?

I want to hear your thoughts on this concept, so please leave your comments in the box below.