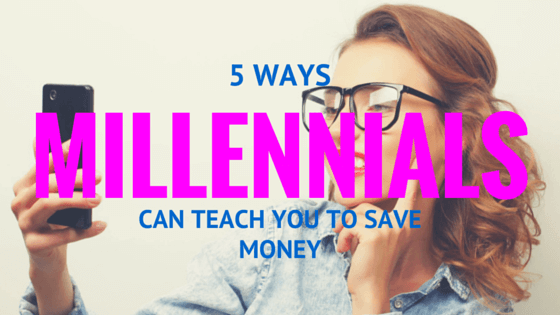 You are here: Home / Save Money / 5 Ways Millennials Can Teach You to Save Money

What’s up y’all!!? Today we’re gonna talk about millennials. Your first thought probably isn’t, “what the hell is a millennial?”

We talk about them all the time. Millennials are those who “reached adulthood” at the turn of the century.

Why did I put that in quotes you ask? Well, as a millennial myself, I can say that many folks think we’ll never reach adulthood.

Also known as members of Generation Y, millennials are those born between 1980 and 2000. Along with being the “youngsters” of society, they’ve gained a reputation for being lazy.

They also take too many selfies and overspend their money instead of paying off the debt they’ve racked up.

Many millennials graduated during the Great Recession, too. This has caused them to get creative with work, like have a couple of part-time jobs instead of one primary job.

So it comes as a surprise to see that these “lazy kids” are outpacing everyone in retirement savings.

Yes, many millennials are facing low wages and high student loan debts. But that doesn’t mean we can’t learn from some of their money habits.

Here are five ways that millennials can teach you to save more money:

The average apartment in most densely populated cities is circling the $1,900 mark. And I’m talking a one-bedroom flat with a leaky faucet and noisy toilets.

With rent like that, you can stop dreaming about that nice three-bedroom luxury apartment. That said, a lot of millennials are turning to shared housing.

Earlier generations would typically buy a house and look to start a family after getting a decent job. But millennials are renting apartments to share with one or two people as soon as they graduate.

The main benefit of this noisy arrangement is a split rent. Most people in their 20s are making around $31,069 per year.

That’s about $2,600 monthly, and almost half of that goes to rent alone.

That’s a stressful situation if you live alone. Space and privacy might be limited, but there sure is a financial benefit to having a few roommates.

It’s Thursday night and you just got home from work. You’re starving. The last thing you want to do is go grocery shopping.

You can either go out and spend $10 on some epic takeout food or you could cook at home. If you planned ahead and started buying groceries for the week, you could be ready for this situation.

Sometimes we don’t want to skip takeout though… right? I think it’s because we treat it as a way to pamper ourselves after a long day at work.

But we could pamper ourselves more if we save on those daily splurges and instead just go out once or twice a month. The same meal that’ll cost you $10 at your average restaurant can come out to half of that if you ate at home.

So instead, start dividing a weekly grocery budget and planning your meals.

No, not the word you’d whisper to your friend in 7th grade when you gossiped about the mean girl in your class. I’m referring to a b-word that will help you save money: budgeting.

Millennials are in a financial pickle. And it’s not just because they’re earning less (by comparison) than their parents did at the same age.

For many millennials with a part-time job and a ton of bills, traditional methods of budgeting are not efficient.

One way millennials tend to save is the napkin method. It’s given that name because it’s usually written down on a dirty napkin (haha). It goes like this:

*A good tip is to divide the budget into 4 for weekly estimates and 31 for daily estimates to prevent from overspending.

In a BI Intelligence survey, 25% of millennials admitted to never having paid for cable. That doesn’t seem like much, right?

But it’s a fact that the modern generation spends a lot of time watching the latest series and movies on demand. So spending money on Netflix and other streaming services can add up to make quite a dent in your savings.

That’s why strategically sharing accounts with your friends and family can save you money.

A lot of these viewing services have the option for multiple users in one account. It all comes down to a matter of looking for the right plan.

For example, Netflix can have up to four people streaming at once… who knew? They bump the cost up to $12.99 a month instead of the original $7.99 for two simultaneous streams. Not a bad deal.

Millennials love texting and that’s no secret. But oftentimes, they are actually saving money by signing up for text alerts on their phones.

You can even opt for receiving alerts when your free trials are over so you decide whether to keep or cancel a subscription by using ‘oh, don’t forget…’. Some services have “remind” features in which they send you alerts when it’s close to billing day.

You can even sign up for apps that send you special offers on random products and coupons. Who would have thought just using your phone can save you money?

Yes, they might be lazy and drowning in debt. But millennials sure know how to take advantage of almost anything to save money.

From sharing a living place to sharing a password, or budgeting on a napkin. Even by limiting how often they eat out, millennials can teach us all how to save a little more money.

For you fellow millennials out there – what other crafty ways do you save money?