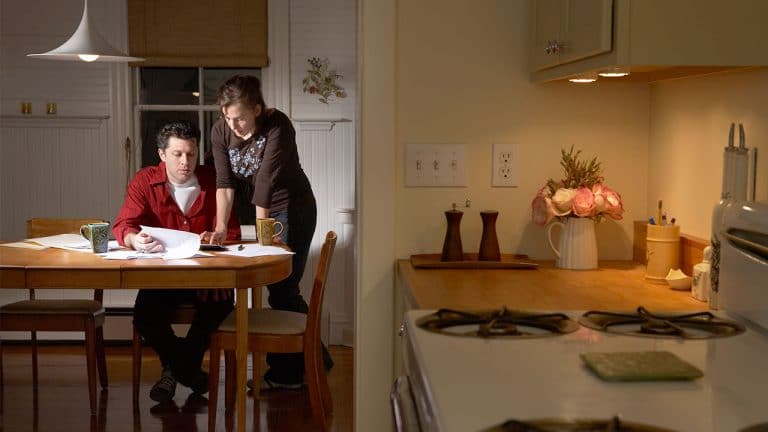 A few years ago we had credit card debt.  How did we accumulate it?  The same way any “normal” family does – home expenses or some other series of random purchases. We also worked really hard to pay it off.  When the debt was finally paid off, it was almost anti-climactic because we didn’t even realize how fast it’d happened.  We didn’t really have a plan, but we put as much as we could toward debt and it worked. I think just being aware of the debt was the first step.

This doesn’t mean we are debt-free though. We still have student loan debt and a car loan we’re working to pay off,  as well as a mortgage and home equity line.  But for some reason paying off the credit card debt felt pretty damn good.  When we were in this place, there wasn’t even a thought of stashing cash – we just wanted the debt gone. Yet, as we get older, make more money, and cut our overall debt, I’ve often considered padding my savings over paying down debt.

I’m not sure why it is, but the feeling I get is that having credit card debt is a heavier weight than other debts. So I am constantly going back and forth trying to figure out if I should hoard cash or put everything I can toward debt. As I mentioned in an earlier post – I am pretty extreme and I am really trying to be more balanced, but it’s not easy.

Pay Off Debt or Save: Their Opinion

1) Erin El Issa: “Saving Money vs. Paying Off Credit Card Debt: Where Should You Start?”

Erin lays out three key steps to making the decision on whether to pay off your credit card debt or start saving money: 1) adding up your debt, 2) evaluating your savings, and 3) setting priorities. The focal point is first getting an understanding of how much debt you’re actually in. Erin suggests writing everything out to see what debts you have, despite how shocking it can be.

She recommends building up your emergency savings and evaluating your spending for a month to see how much you actually need to budget (I suggest using Mint for this). Lastly, Erin suggests using balance to pay off your debt until you’ve built a nice emergency savings. Once you have that in place, focus on “blasting through” your high interest rate debt.

2) Erik Carter: “Should You Increase Savings First or Pay Down Debt?”

Erik Carter of Financial Finesse lays out 7 steps in this Forbes article to help you figure out this often-asked question for yourself. His steps also focus on building up an emergency savings, but also on retirement savings, saving for a house, and putting away money for college.

One of the more unique steps Erik lays out that interested me was maxing out a health savings account. He suggests doing this because an HSA is pre-tax money and a tax-free way to pay for health-related expenses. One of the best features of an HSA, as he describes, is that “…unlike an FSA, you can carry it over and invest it for the long term. Anything you don’t use grows tax-deferred and can be withdrawn penalty-free after age 65 (and still tax-free for health care expenses).” Pretty sweet.

3) Fidelity Viewpoints: “How to Pay Off Debt – And Save Too”

Fidelity usually has some pretty good blog posts, and this is a more recent example (from February of this year) of one. They lay out a 6-step strategy for paying off debt while also still building your savings. Fidelity suggests favoring a 401(k) before paying off student loan debt and credit card loans. Their argument is that loans like student loans, car loans, and mortgages typically have lower rates (and sometimes tax advantages) so it’s okay to pay the minimums for awhile. Fidelity also suggests using a Health Savings Account – in fact they did an entire blog post about it here.

Sandy’s article is quick and to the point. She advises knocking out high-interest rate credit card debt, then ramping up your retirement savings, similar to Fidelity’s suggestion. She says that “…putting off saving for retirement until you’re debt-free could cost you the most valuable asset you have: time.” I’m not sure if her article was meant to be this literal in that you should stop paying off debt, make minimum payments, and put the rest in savings – so I’ll leave it up to you decide.

“Those with debts AND savings are seriously overspending but the solution is simple. Pay the debts off before you save and maybe even your mortgage. Forget the old ‘must have an emergency savings fund’ logic as getting rid of debts beats that too.”

The examples use pounds instead of dollars, but you’ll still get the message. Helen describes how people holding debt with the same banks they’re holding savings with as getting a loan with your own money, only at a higher rate. She also talks about a few exceptions to paying off debt first, such as debts that incur a penalty for early payment. One other point Helen makes in this article is around mortgage debt. Many people don’t consider this a “debt”. I think this is true, and it’s most likely because mortgages are usually larger, lower rate, “always there” debts to many. I’m not saying I agree with this argument…

6) Valencia Higuera – “Should I Pay Off Debt or Save Money First?”

Most people know about the first reason – having debt usually means paying interest, not having debt means that will go away.

The second point is interesting, though. It’s true that 30% of your credit score is based on how much debt you owe (check out this article to see the other factors and weights of your credit score) and I’ve seen it play out first hand as a credit analyst. Even those with flawless payment histories still get pinched on their credit score if they’re carrying a ton of debt.

Lastly, the third point about peace of mind is spot on. Having debt can be a very overwhelming feeling for people, so reducing or paying it off can be an incredibly freeing experience.

Valencia’s 2 reasons to save money first are 1) if you have a low rate on your credit card and 2) to create financial cushion. I’m still against the argument of saving while you have credit card debt at a 0% promotional rate. Many people do not have the financial aptitude to stick to paying it off – they get used to having a super low monthly payment and forget that the rate hikes after the promotional period ends.

Her second point about a financial cushion is much like the arguments above as it relates to having emergency savings. I think it’s good to have this, but not always in lieu of paying off debt.

This article is for those who are in a position of already having some money set aside and can’t decide whether to keep it in savings or use it to pay off debt. Ms. Palmer poses 5 questions in this article to help the reader decide for themselves:

So instead of answering the question for you, she makes you think about it yourself.

8) Marcia Passos Duffy – “Should You Pay Debt Before Saving?”

“Simple math suggests it’s better to get rid of debt before saving for retirement or an emergency fund. After all, if the savings rate is 1 percent and you have credit card debt at 14 percent interest, money is better spent paying down debt quickly. But personal finance decisions are rarely so simple, and this method may not be the right choice for everybody.”

This article references different financial experts and their quotes on this subject – and for both sides of the argument, which is cool. One argument for paying off debt before saving talks about letting our emotions get in the way of what makes sense both mathematically and financially, such as padding our savings account for a false sense of security. Instead we should pay off debt first.

There are also some valid points about saving first. The article then finishes with discussing a balanced approach – both saving money and paying off debt at the same time.

Pay Off Debt or Save: My Opinion

My simple answer is balance. Pay off debt while you save. Yes, it will take longer to reach your goals in both of these categories, but it will limit stress from either not having enough savings or having too much debt.

Any time we’re considering buying something (like a coffee maker, which we did just buy), we never go for the most expensive model, and typically not the cheapest model, but usually something right in the middle. Balance gives you the best of both worlds. With money, it’s a slower moving turtle, but in the long run you’ll win the race.

As I mentioned in my first post, take your leftover money at the end of the month and split it between savings and debt. This will give you a good start.

This question is not easily answered, hence the reason it’s one of the highest searched phrases on Google. So it begs the question, which way do you choose (or have you chosen in the past)?

We are a participant in the Amazon Services LLC Associates Program, an affiliate advertising program designed to provide a means for us to earn fees by linking to Amazon.com and affiliated sites.