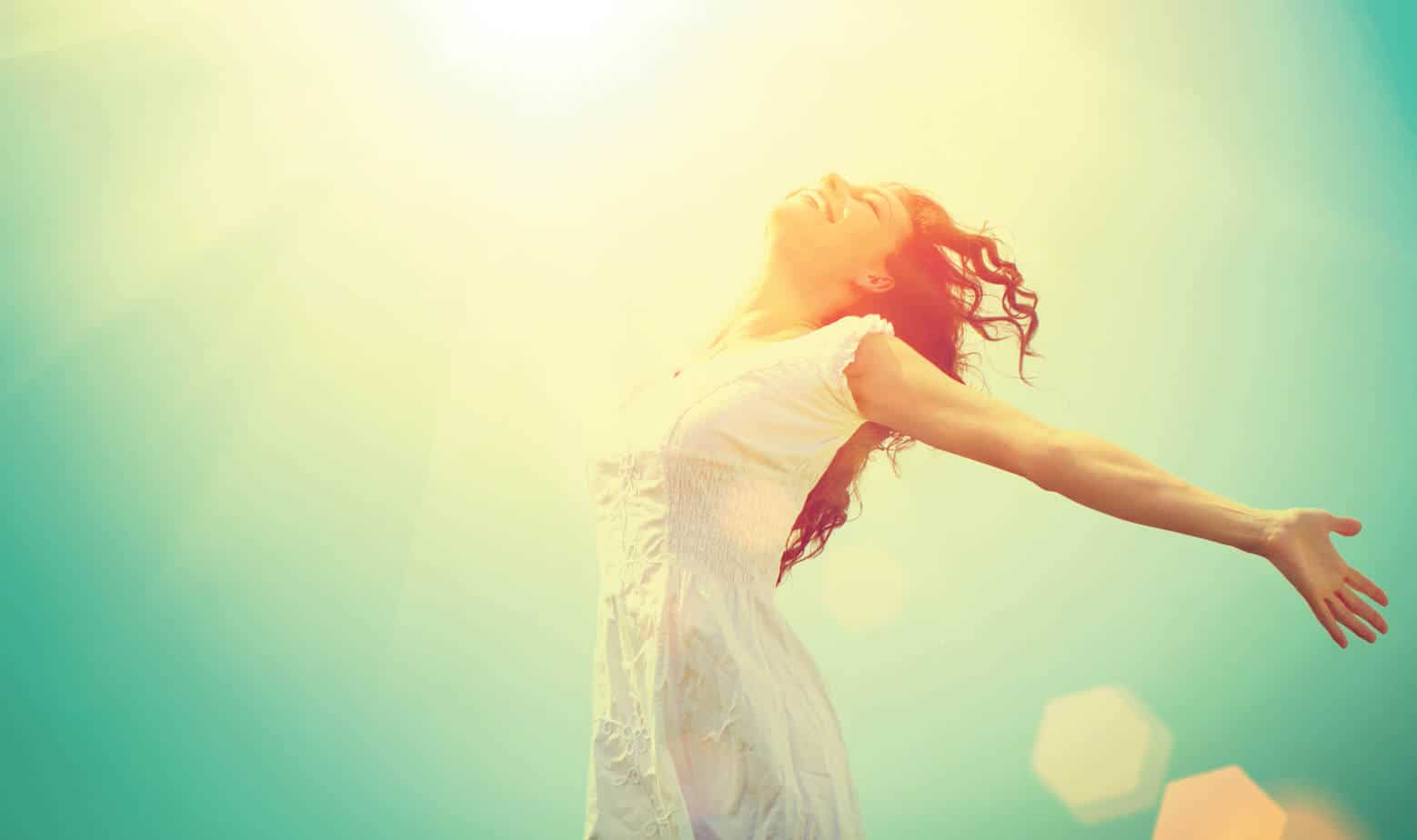 You are here: Home / Save Money / What Causes Happiness? Here’s How to Become Truly Happy

How happy are you? Author Matthieu Ricard says that momentary happiness is something us ‘Westerners’ get used to.

We think happiness comes in a single moment. Maybe it’s meeting with an old friend or a successful project getting completed at work.

Happiness is long-term. It’s a mind-set that we need to work hard at building.

So what causes happiness?

Studies may show that happiness is partly due to our genetics, but that doesn’t mean it’s solely dependent on it. We can create our own happiness.

We can work toward having a more positive frame of mind. We just have to want it. It’s not easy, it’s actually hard work.

We also need to be able to enjoy the present moment. This is a key part of Buddhism, too.

Sukha is a term Buddhists use to define this. It’s being able to free ourselves from negative emotions and be at a state of well-being. But again, this doesn’t come with ease.

Seek happiness from yourself, not others

Happiness needs to come from within, not in the pursuit of pleasing others. Think about it. Why do people buy expensive cars?

When you first consider it, you might agree that it’s to make themselves happy. But what happens if they were the last person on Earth?

What would be the reason of having an expensive car? Who would see it or care?

Case in point. Whether we believe it or not, we tend to seek happiness by appeasing or showing our worth to others. Not ourselves.

We are in a constant state of seeking. We are always looking for something to make us more happy. It’s the entire ideal behind the hedonic treadmill.

Figure out what would make you happy if you were the only person left on Earth. Only then will you be on a track to internal happiness.

Happiness isn’t the same as pleasure

Happiness isn’t the same as pleasure. Pleasure is something that’s short-lived and provides some form of instant gratification.

It’s what we’re usually after.

When we eat a good meal, go out for a few drinks, or buy something, it usually leads to pleasure. If it didn’t, we wouldn’t waste or time or money.

Happiness is so much bigger than that, though. If you continue to seek pleasure thinking it’ll get you to long-term happiness, it won’t.

You can’t just buy a bunch of crap and hope it’ll all add up to make you happy in the long haul. It doesn’t work like that.

Happiness also isn’t just a quick break from suffering. For those of you that work full-time at a job you don’t care for, what are Sundays like for you?

For most people who aren’t happy at their job, Sunday can be pretty miserable. You tend to think about the upcoming week that you have to drag yourself through.

Yet we look forward to the weekend as a momentary relief from this week-long suffer.

It happens on the other end, too, when we tie our happiness to things that can be immediately taken away.

Imagine having a job that pays well and you enjoy. What happens if the company lets you go? Will you still be happy?

The Buddhists call this state dukkha. It refers to momentary unpleasantness and a high vulnerability.

Dukkha can leave us to feel like life is pointless if things don’t go our way. No wonder we’re so stressed about money.

Buddhism says that real suffering is going to happen – it’s unavoidable. But our unhappiness doesn’t stem from this. It stems from the unhappiness we actually create from this.

Here’s an example. Say you’re supporting a family on a good salary at a job you don’t mind. Then one day you walk in to find out they’re letting you go.

The unhappiness comes in when you decide it does, though. Losing the job doesn’t cause your unhappiness.

It occurs when you start to think of the loss of money, status, wealth, career, etc. Those things might be true, but if you let them consume you, you’ll never find true happiness.

What if instead, you lived below your means. Then the day you get laid off, you may feel a sense of relief and drive to do something bigger and better?

That’s what happened with J. Money when he got fired. He could have wallowed in self-pity, but instead he started his own business.

And it worked. The sooner we can move away from unnecessary worrying, the sooner we’ll reach happiness.

Our egos can be a huge problem when it comes to reaching happiness. You may not want to admit it, but I’m sure at some point in your life you’ve given yourself an imagined identity.

This is a persona you develop to show other people you’re someone who you’re not. For example, maybe you say that you don’t care what other people think about you, but in reality you do.

Even feeling the need to say that shows that there’s a sense you might care what others think. Here’s the thing – it’s okay. We all do it.

But what’s happening is these personas we create are limiting our ability to be happy. Over time, it becomes the core of who we are, or think we are. Anything that goes against it tends to threaten us.

So lets use the example of not caring what people think.

If someone tells you that you’re showing up offended by something they said, it could be a huge blow to your ego. This causes further frustration from within, which leads to unhappiness.

Instead, let’s all try to detach ourselves from our egos. If you’re still thinking that you don’t have one, think again. Mull it over.

There has to be something you can let go of. If we try to uphold a certain reputation, we’ll spend all our time and energy doing so.

Buddhist thought says that we’ll only meet confidence and inner peace through egolessness. When you think too highly of yourself, you’re setting yourself up for failure when things don’t go as planned.

So let’s separate ourselves from these egos we’ve developed over time. Be humble. Recognize your limits.

In doing this, you won’t consciously or sub-consciously seek validation from other people. You can start to be happy with YOU.

Another benefit to detaching from our egos, per Ricard, is we can spend more time focusing on others. We’ll be more in touch with helping others instead of focusing only on our own issues.

Ricard also recognizes Gandhi, Martin Luther King Jr., Mother Teresa, the Dalai Lama, and Nelson Mandela as people who can help others because they stopped focusing on themselves. Now there’s some food for thought…

Our thoughts and emotions can impact our happiness

I have some serious road rage every once in a while. But guess when it comes out? It happens when I’m running late, having a bad day already, or when I’m just flat-out in a bad mood.

This type of behavior happens to us all, and it’s self-destructive. When something bad happens in your life, you can start to feel like everything is against you.

Let’s say you lose your job.

What if you then came home and saw a drop in the stock market? Even though your portfolio most likely wasn’t crushed, it might feel like it. Let’s face it, you’ve already had a shitty day and you lost your job.

Over time though, you’ll find a new job and you won’t feel the same way you did that day.

Buddhism says that we can’t experience opposite emotions at the same time. Our negative emotions can get out of control in these situations.

And it’s not abnormal to feel that way. But we need to do a better job at recognizing what triggers these spirals of emotion.

Control your emotions before they control you.

Control your emotions before they control you… #FoodForThought

So when you hate your boss for firing you that day, you can’t love that person at the same time. It’s not in our DNA. Over time, though, you may reach acceptance with that person (or maybe not…).

So we can’t have conflicting emotions at the same time. Because of this, we have to gradually decrease the negative emotions and replace them with positive ones.

Think of a seesaw. If we start forcing ourselves to replace negative thoughts with positive ones, the only way to go is up, right?

If we love our job whole-heartedly, we can’t also HATE it at the same time. Now, there’s usually a balance between these two emotions, but the fact is you have control over which way you want to go.

We can’t just suppress the negative thoughts, either. We have to discuss and face them.

Acknowledge their existence, then do something about it. So if you’re unhappy in your job or feeling like shit because you are way behind in saving for retirement, stop for a moment and do some self-reflection.

Quit feeling sorry for yourself, acknowledge that you’re feeling this way and find out ways you can do something about it. If you let those negative thoughts consume you, you’ll never reach long-term happiness.

Remember, this is just a temporary state of suffering, and you’re choosing to how to react to it. It doesn’t have to be negative.

Let’s face it, this stuff is easier said than done. But think about it – if reaching long-term happiness were so simple, we wouldn’t have the depression or stress rates we do today.

You will need to first recognize you have an ego, then attempt to overcome it. You’ll need to separate pleasure from happiness. And you’ll need to do some pretty deep self-reflection on what you want out of life.

This stuff won’t happen right away. But if you’ve gotten this far in the article, you’ve already invested some time in yourself, so don’t let it stop now.

Remember, we’re after sukha – which is much more fulfilling than a moment of pleasure or even long-term wealth or fame. You’ll be happy with YOU.