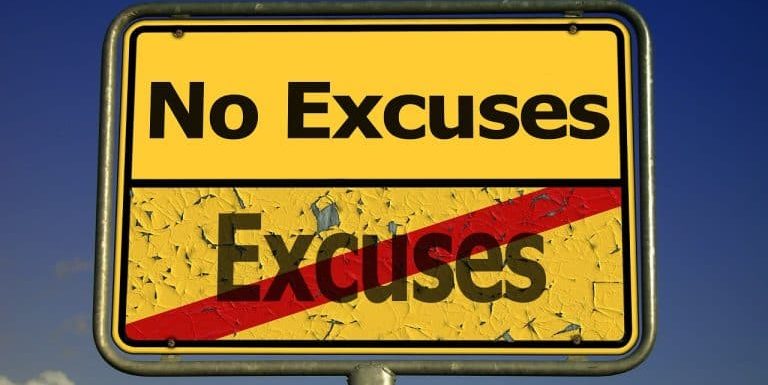 You are here: Home / Save Money / Why Ignoring Money Excuses Will Cost You Later

One of my goals recently has been to wake up early (check out a great blog post here from my friend Steve on this) to get a head start on some of my daily goals, such as running, blogging, and making some kick-ass green smoothies.

I’ve failed miserably lately. In fact, since I decided I really wanted to do this about a month ago, I’ve done it exactly 0 times. But just wait. I have a reason. I am working a lot lately and I’ve just been too tired to wake up early. So that’s my reasoning and I’m sticking to it.

“Ninety-nine percent of the failures come from people who have the habit of making excuses.” – George Washington Carver

That’s bullshit. It’s an excuse. I make excuses (let’s call them what they really are…lies) every day. So do you. In fact, this study shows that 63% of us tell up to 3 lies per day. That seems like a pretty low number when you consider that 60% of us can’t go 10 minutes without telling a lie.

Now, you’re probably saying to yourself “wait… I don’t lie” I don’t consider myself a “liar” in any stretch of the imagination, in fact if you ask my wife, I’m a horrible liar. I’m talking about the subtle lies that we believe are truth. In other words, we are lying to ourselves. There is absolutely nothing holding me back from setting my alarm, getting up in the morning, and going for a run. Nothing. I just need to make sacrifices, such as getting to bed earlier to make it happen.

So being that this is a money blog, how do excuses connect to money? Believe it or not, we make excuses about money all the time. Do any of these sound familiar to you?

“I can’t invest now, I need to save my cash for an emergency”

Seriously? You can’t afford NOT to invest your money. You’ll have emergencies and you’ll always need cash on hand – it’s a fact of life. But if you hold off on accumulating wealth because you’re too nervous for the future, you’ll end up actually losing money.

Every minute you spend not putting your money to work for you, you’re getting your ass kicked by things like inflation and shitty money market interest rates.

I hate this. This is the same as saying “you only live once” and it’s just stupid, so stop it. This is the worst sentence someone can use when making a financial-based decision.

Let’s imagine that you drive past a cool-looking Jeep that you have to have. Hell, you just got that nice Christmas bonus, it’s snowing, and the Jeep would be great in this weather. You think to yourself, “I only live once!” and your idiot friend who isn’t financially savvy tells you it’s a great idea. Do you need it? No, but you happen to have the money, so you buy it. Years later, you’ll read a bad-ass personal finance blog like Budgets Are Sexy and realize what dumb move that was. Hey, maybe you’ll even blog about it?

“I plan on earning way more in a few years”

Even if this is the case, it doesn’t mean you shouldn’t save as much as possible now. What usually happens is our “quality of life” (I put it in quotes intentionally) increases as our pay increases. As we make more, we think we can afford more, thus we spend more. It’s a vicious cycle. By holding off on saving or making smart financial moves now because you expect to earn more later, you’ll only give your future-self the shaft.

For old time’s sake, I was reading the Millionaire Next Door the other day (we had to read it in grad school for a finance class) again and there was a story about a doctor who was living paycheck to paycheck. This guy was a specialist and raked in over $700k a year, yet he could barely pay his bills. So it doesn’t matter how much you make, it matters that you start to make smart moves financially as early as possible. This excuse is void.

You probably get the sense of where I’m going here, so I won’t go on all day with excuses, in fact I’d rather hear from you. Here are two other articles to check out if you aren’t connecting with those listed above… they may jog some thoughts for you:

How to stop the excuses

So you get it. You make excuses to yourself all the time, whether you know it or not. It’s OKAY – it’s normal human behavior. So now comes the question, how do we stop (or at least reduce) the excuses from spewing out of our mouths?

While this might take a little time, going through the exercise will help reduce excuses for you going forward, so just give it a try.

First, look at the result of what you’re trying to carry out. Let’s take my example from before… my end-state was that I haven’t woken up early [insert excuse].

Next, you’ll need to trace it back to the reasons why that result wasn’t reached. One of my favorite ways to do this is by using the 5 Whys. The 5 Whys is a process that’s universally known and used as a Six Sigma technique to get to the root cause of problems. In fact, it’s a process regularly used at Toyota. Essentially, the 5 Whys is a process where you’ll ask “why” to each response until you reach the root cause of the issue. It might be 2 Whys, it might be 46. Don’t get too literal with the number 5. Buffer does an excellent job at describing the 5 Why’s here.

Using my example… let’s toy with this a bit. I am going to try the 5 Whys method by asking myself these questions. This will help me get to the root cause of the issue:

Alright… so I could probably keep going here, but I think you get the gist of where I am going. If I stopped here, using the answer to finish a project and get caught up, I might think the root cause is time management. Maybe I need to get more organized at work so I don’t have to work late, thus I wouldn’t have to make up any “down-time” at home, which would allow me to get to bed earlier, and I could ultimately make my goal of waking up early. Phew!

So it might seem silly to do this for just a normal goal you’re failing, but give it a try and get practice digging into the root cause of an issue. It’s easier to correct a root cause then to immediately solve the surface problem.

Time to commit to yourself

Hopefully by now you’ve come to the realization that you make excuses (lie) to at least yourself. I mean, maybe you are ready to admit you’re lying to others – and that’s awesome.

The goal here, though, is to admit you’re making excuses about your money and fix them. If you don’t, these money excuses will cost you big time later in life. So it begs the question…

What excuses are you making with money and (if you’re brave enough to answer) what will you do to fix them?